WALKER: Welcome to the live chat for ABRAHAM LINCOLN: VAMPIRE HUNTER. I’m Benjamin Walker; this is Rufus Sewell, our director Timur Bekmambetov you know he makes me nervous. He’s so powerful and talented. Right, right, it’s written there. And of course of Executive Producer and Author Seth Grahame-Smith. Let’s get started. Timur, first question. What is it particularly about Abraham Lincoln’s life story compared to let’s say other historical figures that make it ripe for an action, vampire spin?

GRAHAME-SMITH: In a way though he was the, the first and probably only true American superhero. Right?

GRAHAME-SMITH: I mean if you think about the things that he did. I mean you know we, we’ve talked about this, you know the fact that he, his story, we’ve talked about this forever, Timur, his story is like a super hero origin story. You know he comes from disadvantage; he’s surrounded by loss and death and yet he’s so strong and so you know determined that he picks himself up and he really trains himself.

BEKMAMBETOV: Yeah and it was unique that, that he’s, because his weapon was his nature.

BEKMAMBETOV: And it, his, it’s a very unique super hero. It was not about the jumping from the roof to roof. It was about being with a nation and nation was his weapon.

SEWELL: So was it difficult as an actor to depict the grandeur of a legend like Abraham Lincoln while also making him credible as a kick-ass, and if it works with the accent vampire killer?

WALKER: That’s an interesting question Rufus. And it’s kind of a long the lines of what we’ve been talking about. What makes him fascinating and impressive is that he was a common man who pulled himself up, who was self-educated; he made himself into a hero. But his origins are our origins as a, I mean ours, as citizens and as Americans and as common men and women. And then when faced with extreme and extraordinary circumstances, how do we react? And that’s what makes him a hero.

GRAHAME-SMITH: Rufus what I would like to know, if you could be so kind as to ask Ben. I was curious what kind of research he did for the role.

SEWELL: What he said.

WALKER: All right, actually we get a lot. I mean what we are making is a period movie that happens to be about vampires. I read a few books; one book in particular about he melancholy of Abraham Lincoln was very helpful. Kind of about his depressive and romantic nature, it lends itself nicely to our, our gothic tale.

GRAHAME-SMITH: One of the things that I loved that Timur did with the movie is everything, I mean even though the premise of the movie might sound ridiculous, everything within the movie is treated with real care and historical accuracy. To the way things look, to the way Lincoln looks and behaves, to the timeline of how things actually unfolded. And, and so I think that there’s a strange, you know for this big action you know summer movie there’s also a strange amount of historical accuracy in it.

WALKER: Who the hell are you in this movie?

SEWELL: Well I play Adam and he doesn’t appear in the book, which was a shock to me when I first, I Kindled the book very quickly and did a search and my character didn’t exist and I thought, “Well that’s a good start.” But you know I see the, the, that it was necessary to have a central vampire who represented the aspirations, who was, I mean I like to think you know that he sees himself as the president of the vampires. You know that he’s a counterpart. Because I, I see him, he comes across very much in the reading as a kind of cigar room dealmaker of the vampire world, you know? And to have this figure to whom all vampires lead you know and that’s why he’s called Adam because he’s the original vampire, the vampire from which all other vampires came. He was around the time of the ancients and the pyramids and you know. And for someone who represented the heart of the threat to be met with and dealt with, with towards the end of the closing chapter of the film.

WALKER: And Tim Burton produced it. Is he a nice guy?

BEKMAMBETOV: He’s a nice guy. I mean I really think his role is huge in the movie. We, and, and we did and understood. Because I think Seth wrote his book influenced by his movies and you can, you can feel it. I’m sure you’ll like—

GRAHAME-SMITH: I didn’t rip him off Tim Burton. That’s what I’m doing now, from this point forward. No, I mean it’s interesting, I’ve heard you say that and it didn’t occur to me at the time, but I feel like going back and looking at the book you can feel the influence of, of that and other filmmakers and other writers in the, in the book. I think Tim gave us the sort of protection to tell the story the way we wanted to tell it, which is very serious and straightforward and never winking. I remember the first time we all met about it we said, “Never winking, never making a joke out of the concept, but just playing it seriously.”

WALKER: Timur obviously your work is known for its extraordinary visual style and this is in 3D, very exciting. What was that like making the movie in 3D?

BEKMAMBETOV: It’s challenging, it’s, it’s interesting because this language doesn’t exist yet. There is only a few good movies and nobody really, nobody really knows what does it mean, 3D movie. There’s no rules yet. Like each, everybody—

BEKMAMBETOV: There’s no, yeah, there is no rules. There’s only one really good movie, a few good, good movies and that’s it. And if there’s any film language it’s just, we’re just learning and we’re just creating it. And it was very exciting for me to, to do it because it was a challenge and it was a chance to create our own language. And I think this movie will have this very distinct and unique language, 3D language. When the, because when you are fighting the distance has a, has a lot of—

WALKER: Sure it has a lot to do with it.

BEKMAMBETOV: A lot to do with it. Because when somebody’s swinging an axe—

WALKER: Especially with an axe.

BEKMAMBETOV: Yeah you need to know and the audience has to feel, has to feel the distance and the 3D is the only technique that can help you really feel it, really feel with this axe will chop your head or not.

GRAHAME-SMITH: Oh Ben you know it strikes me out of thin air that you are a gifted comedian.

WALKER: It must come out of thin air.

GRAHAME-SMITH: Out of thin air. I was just thinking about how what a gifted comedian you were. You know you like improv, you do some stage shows in New York and, and you are a funny fellow. What was it like, what was it like sort of getting into this more serious, more dramatic role?

WALKER: Well my training is, classical training I went to a theater school.

GRAHAME-SMITH: Julliard, you can say it.

WALKER: But, I don’t know, I think what’s fascinating about Lincoln is that I think he was a funny guy. He certainly had a sense of humor. Particularly when he was traveling on the circuit as a lawyer and entertaining people. Great storyteller, telling stories and making people laugh in the taverns at night. I don’t think this is an unfunny movie, but it was pretty effortless, because you know the script that you wrote and Timur’s direction and how frightening Rufus is, I mean it really sucked the humor right out of when he’s trying to bite your throat off.

BEKMAMBETOV: It was, it was, it would be absolutely impossible for Lincoln to survive without sense of humor.

WALKER: And there’s so many different depictions of vampires. Why, why did you pick guys like Rufus to do this one? What influenced you to—

GRAHAME-SMITH: Why aren’t your vampires sexier?

WALKER: Right, why don’t they glisten in the sun?

WALKER: That they are real. That’s, that’s what’s scary about them. So your book, huge success, very exciting and now the movie’s coming out. Are you going to write a sequel?

GRAHAME-SMTH: I hope so, yeah. I, I, you know I’m fascinated with, you know for people who read the book, without saying anything about the film or the similarity of the ending or whatever, the book certainly leaves things open. And there’s, there’s more to you know certainly the Henry story and there’s more to perhaps the Abe story than we have told in this book.

GRAHAME-SMITH: And certainly more in the Adam’s story, because frankly I can invent a whole Adam story now. So you know there is—

SEWELL: For me you should.

BEKMAMBETOV: It’s been exciting to hear all of your questions about the upcoming film. Thank you for asking and take care. 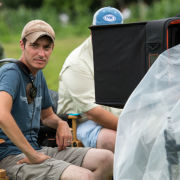